This week marked the launch of the Stegos staking pools. You can find the launch announcement here, along with all the details about our first pool, The Vault, and the huge bonuses it brings!

This announcement generated a lot of excitement in the community, but also a lot of requests for more details. Here are the answers to some of the most common questions. If you still want to know more, contact one of the admins on our Telegram group, or head to the forums.

If you’d like to sign up, you’ll need to complete the KYC form here. You’ll then be sent an application form for the pool itself. These two forms will walk you through everything you need to do, and your STG will be earning their keep in no time! 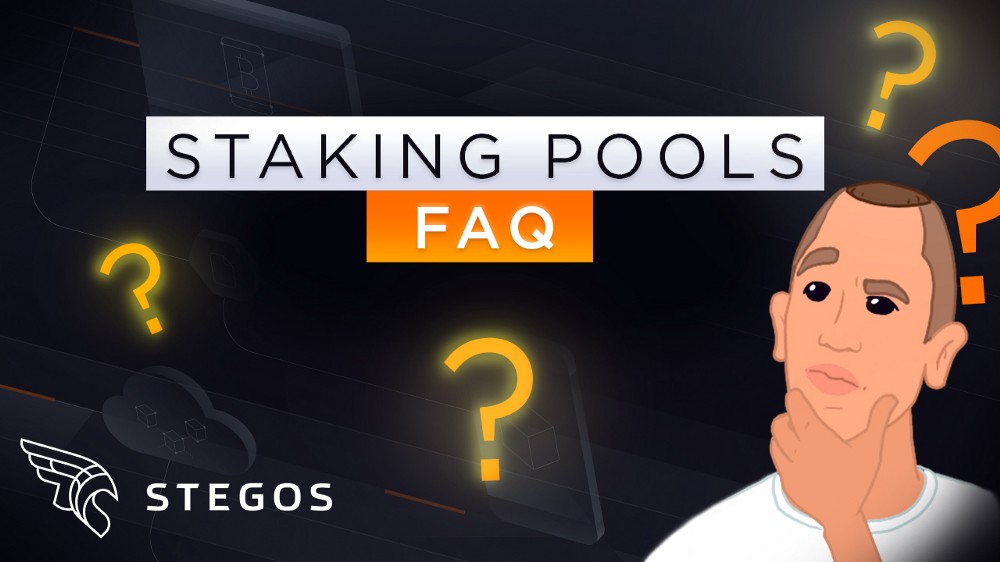 What are the Stegos staking pools?

The Stegos staking pools are a place to safely store your STG and earn rewards without having to run a Stegos node for yourself. We’ll run the nodes, you’ll get the rewards!

Why should I put my STG into a Stegos staking pool?

There are lots of reasons! Perhaps you don’t know how to run a node, can’t run a node safely or easily from your country, don’t have access to a stable enough setup to be eligible for the validator service award. Maybe the cost of running the node is too high, or you simply don’t want to!

Whatever the reason, if you’ve got STG and can’t stake yourself, staking STG via an official Stegos staking pool is a great way to earn rewards. The Stegos chain provides huge incentives to stakers, so if you don’t stake your STG — either yourself or via one of our pools — you’ll be missing out on a lot of potential earnings.

Is there a bonus for using the pools?

Absolutely! In addition to avoiding the cost and difficulty of running your own node, the Stegos staking pools each come with their own special bonuses and rewards. Our first pool, The Vault, has different levels of staking reward bonus, depending on how long you agree to lock up your tokens.

It’s very important to note that these are bonuses on your staking rewards, not your initial investment. So if you stake 1 million STG and earn 250,000 STG in rewards with a 6-month lockup, your final balance for withdrawal would be 1,500,000 STG.

Will I need to complete KYC to use the Stegos staking pools?

Why do I need to complete KYC? Isn’t Stegos a privacy coin?

Because the staking pools are a first-party custodial service provided by Stegos, we have to abide by European regulations. We’re urgently looking for a solution to this, but don’t want it to delay the launch of our staking pools.

Rest assured, this doesn’t affect the prviacy status of the rest of the Stegos blockchain: transactions and messages on Stegos are and always will be fully private, and staking on your own node doesn’t require KYC (and never will).

What can I expect to earn in the staking pools?

Stegos is a complicated tokenomic system, with many factors in play, including the VSA (which is a high-variance award) and the relative size of the global staking pool. Therefore it’s impossible to give a precise figure, and we can’t make any guarantees. But with a consistent block time of 5–10s per block and staking awards of 24 STG per block, 10+% annual return on staked STG (before bonuses) is a very conservative estimate. This assumes full staking of the entire supply and never winning the VSA all year (12 STG per block), both of which are very unlikely, so the true figure is almost certainly higher.

Can I still win the validator service award (VSA) if I stake using the staking pool?

Each staking pool will be a single node, and thus receive one chance at winning the validator service award (VSA) each VSA cycle. When a staking pool node wins the VSA, the prize will be divided equally between all users staked in the pool, regardless of stake size.

If having a higher chance of winning the VSA is important to you, we recommend running your own nodes. We’ll be publishing regular tips and advice about the strategy behind staking and the VSA, but everyone has to make their own decisions based on cost, available stake, and ability to provide one or more stable nodes (remember, only nodes which have been available for active validation in 100% of blocks since the last VSA was awarded can win).

Can I stake in more than one pool?

Will there be different kinds of pools?

Yes, we plan to launch different pools to provide something for every level of engagement, holding and risk tolerance! The first pool that’s available is The Vault, a relatively simple — but extremely rewarding! — pool where you can lock up tokens for 1, 3 or 6 months in exchange for bonuses to your staking rewards.

Can I stake in a pool and independently?

Yes. Users are free to stake on their own as well as using the staking pool. In fact, users are encouraged to run as many nodes as they feel comfortable operating!

When does the commission take effect, and how long does it take to get paid?

How can I check my earnings? Can I withdraw my balance at any time?

Initially, balance checks will need to be made manually to a member of the Stegos team. Very soon you will be able to check your earnings via our Telegram bot, launching towards the end of January.

At first, the only available pool will be The Vault, which requires a lockup period of 1 month, 3 months or 6 months, selected at the time of deposit. Once the lockup period has expired, withdrawals can be requested once a day and will be credited to your account by the next working day.

Other pools will be launched soon with different rules and the ability to make daily withdrawals from the start.

Can I change pools after depositing?

No. We may introduce this option at a later date, once the pools are fully automated, but even then it would only be possible to change to a pool with the same or longer lockup period.

What fees are there?

There are currently no fees to use the Stegos staking pools. This probably won’t last long though!

How does STG staking work?

Stegos provides block-based incentives in a similar way to Bitcoin. Every block 36 STG are created, although this figure halves every four years to keep the ultimate token supply scarce and preserve value.

However, to ensure better decentralization Stegos does things a little differently: these 36 STG per block are split into TWO different types of reward: staking rewards (24 STG per block) and the validator service award (12 STG per block).

Staking rewards: 24 STG is given out immediately to the node which created the block as a staking reward. Nodes are selected to create blocks based on their relative STG holdings, with larger STG holders creating proportionally more blocks.

Validator service award: The VSA is randomly triggered and the entire amount is awarded to a single validator with 100% uptime, regardless of their stake. This encourages proliferation of nodes and incentivizes users with smaller holdings. The VSA is designed to be awarded roughly every week, but it’s totally random and can grow to an unlimited size, with an average value of 737,280 STG and regularly topping 1 million STG!

What is a validator?

A Stegos validator is slightly similar to a Bitcoin miner, although being a validator requires very little processing power. A validator must run a full node and stake STG to secure the normal operation of the Stegos network. Validators are chosen at random based on the size of their stake to generate new blocks and earn revenue. Separately, a random validator with 100% uptime will randomly receive the entire validator service award jackpot.

We hope that’s answered your questions, but if you still want to know more, contact one of the admins on our Telegram group, or head to the forums.

If you’d like to sign up, you’ll need to complete the KYC form here. You’ll then be sent an application form.